The Punic Wars were fought between Ancient Rome and Carthage between 264 BC and 146 BC. There were three Punic Wars which spanned over 118 years.

Lots of the information about this war comes from Roman historians, like Levy, who wrote about the wars in detail in his books.

Because the Romans kept such good written records, we have lots of detail about the wars.

We know when they were fought, how they were thought and how many people died. We also have a lot of information about special individuals, like warriors and commanders.

We know all about Roman and Carthaginian tricks and techniques in battle.

Rome did win the war eventually but both sides were stronger or weaker and different moments. Both sides lost many battles.

The final victory for Rome in the Third Punic War saw the end of the Empire of Carthage (the Carthaginian Empire).

Before these wars, the Empire of Carthage had been the most powerful. After these wars, the Ancient Romans gradually became one of the biggest superpowers in world history. 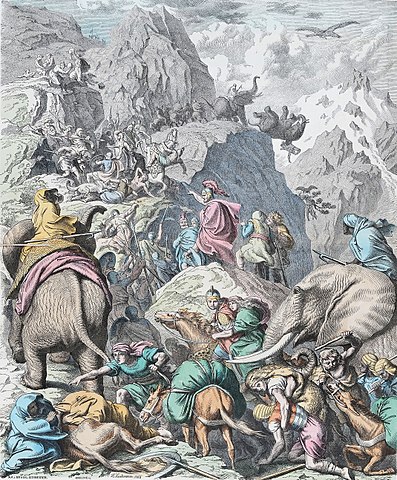 The First Punic War started in 264 BC and lasted until 241 BC. This was the longest war in ancient history up until this date.

Why did Carthage and Rome go to War?

The Roman Republic was growing and Rome wanted to control trade. They wanted to be more powerful than Carthage, who controlled the Mediterranean. Rome was expanding across Italy too. The Carthaginians were blocking the way.

Carthage was a civilisation in North Africa in what is now the country of Tunisia. At this time, the Carthaginian Empire was very important in the Mediterranean world.

They had lots of territory in this land. This land was full of grain, money and other important goods.

The Carthaginians had a strong empire with a big navy. They controlled the seas.

The Romans knew they would need to fight this war mostly at sea. The First Punic War was a naval war. This means it was fought at sea. The Romans built a huge navy in order to try to beat the Carthaginians. 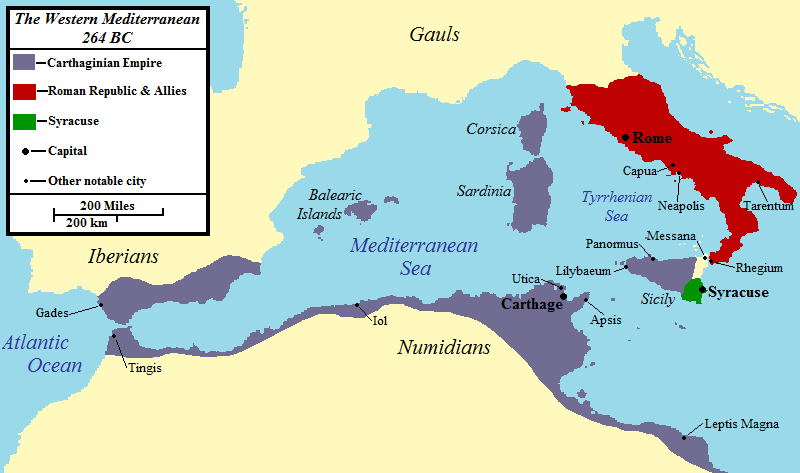 How did the war start?

The war began in 264 when the Romans invaded Messina in Sicily to help the Mamertines. The Mamertines were fighting on this island against a leader called Hiero II.

Hiero II was on the side of Carthage. Rome and Carthage were now at war.

The Carthaginian navy was extremely strong at first. They fended off Roman attacks and defeated them in battles, like the battle of the Lipari Islands in 264 BC.

Within a very short space of time, the Romans had built a strong navy with over 100 warships. Things began to very slowly turn in Rome’s favour.

The Romans employed some clever tactics so they could get on board the Carthaginian ships and take them over. They built an ‘assault bridge’ called a Corvus.

It looked a bit like a ladder and was hinged on the Roman masts on the ship. It came down onto enemy ships to allow soldiers to march across and take over the Carthaginian vessels.

The Corvus was dangerous so the Romans stopped using this. They developed more advanced ways of fighting. Over time, the Romans gained lots of military experience.

They became known in history as successful and strategic warriors.

The Capture of Marcus Atilius

It was not all victory for the Romans. In 255 BC in the battle of Tunis, the Romans suffered a terrible defeat to Carthage. The famous Roman commander, Marcus Atilius Regulus, was captured during this defeat.

Both sides were becoming weary of the long war. When they had nearly run out of money and energy, the Romans used all their private wealth to create new ships.

The new fleet of ships destroyed the Carthaginians in 241 BC.

Roman money and resources seemed to never run out. Some historians of Ancient Rome say that this everlasting supply of money and ships was the reason that the Romans eventually won this war. 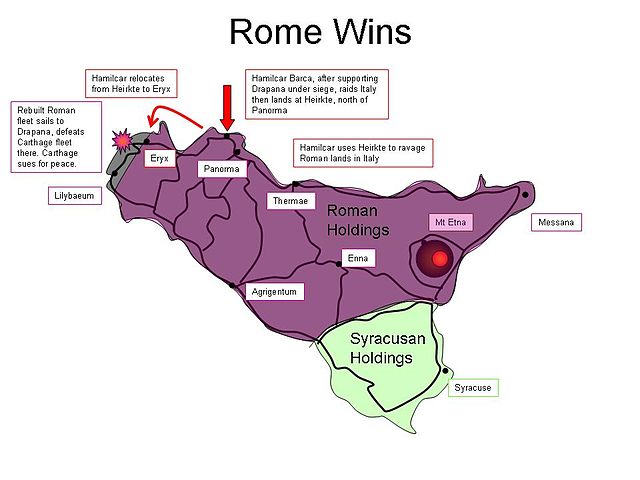 After this final blow to the Carthaginians, Rome got what they wanted and took control of Sicily. The Carthaginians were out of money and suffered many casualties.

A peace treaty was signed which made the Carthaginians pay lots of money to Rome (3,200 talents). One talent is around 33 kilograms of gold or silver.

Carthage was now weak and Rome took advantage of this weakness. Rome took over their other important islands, Corsica and Sardinia.

These are two islands in the Mediterranean between Italy and Tunisia. Rome now had some very important lands and Carthage was left humiliated and in debt to Rome.

These large debts kept the Carthaginians out of action for a while. In the meantime, Rome was gaining strength.