Dances in ancient Roman were described in recovered texts and have been pictured in Roman art. They seem to have been performed mostly for entertainment purposes. Often, the focus was on different elements, such as comedy, love, or even fear.

In the ancient Roman era, dancers were considered professionals but with low social status, not respected artists of religious nature as seen in Greece at that time. Additionally, dance was not a sacred public function, as in Greece, but looked down on as a low form of entertainment.

In the countryside of the Roman Empire, people danced for their own entertainment. Wealthy Romans did not partake in dancing themselves. Instead, they would hire dancers to perform as party entertainment for them.

Several of the dance entertainers were actually slaves from Greece. Under the rule of Emperor Nero, dancing became a disrespected activity, and eventually dancing for the theater was banned due to the request of the Christian church.

Roman dance style was influenced by the various styles of Etruscan and Greek dance. Pyrrhic dances, for instance, were created by Greek dancers but made popular by the Romans.

Dancing priests and other clergymen that were members of the nobility participated in war dances wearing full armor with a shield and a staff. They also engaged in fertility dances sometimes to honor the gods.

In this way, dance originated in ancient Rome as a religious practice. Romans at this time believed that all of the body must be engaged in the dance and under the influence of the religion. Noble matrons and senators’ children engaged in this type of dancing. 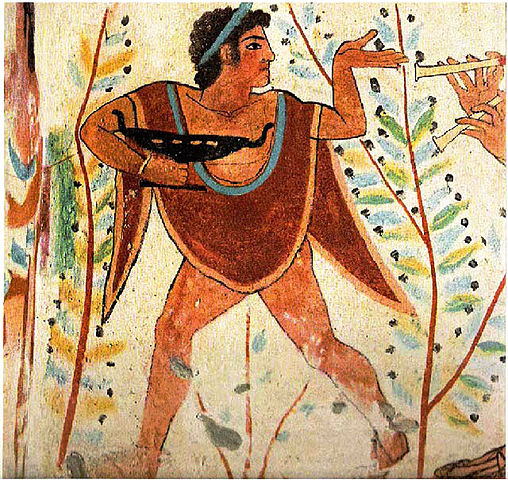 Romans also began to act out theatrical scenes through dancing, which was called pantomiming and did not involve speaking. Their roles were to tell stories through body movements, gestures, and the masks that they wore.

Because of their mutual influence, dancing styles in Greece and Rome were very similar. They used a specific musical tempo with the standard four beats per measure. Dances were often performed in the form of a line in which the leader of the line was the best dancer.

Like the Greeks, Romans also danced to appease the gods. Their costumes in both civilizations were generally standard clothing for daily wear, but sometimes depending on the dance itself might have included a few additional accessories.

The Pyrrhic dance was introduced into the Roman Games by Julius Caesar. It was generally danced by children in the Dionysian style of dance. In Spartan times, boys from the ages of 15 and up would engage in this dance, often while holding weapons.

Gymnastic styles of dance were performed in Spartan times to celebrate battles. Because of this, it always included battle weapons and was designed to show off the soldiers’ athletic ability and synchronized movements.

One dance that was commonly performed by both men and women was the Bibasis. This dance style involved jumping up and down and striking the feet behind. It became a competition, in that successful strokes were counted and compared.