Ancient Greek society produced many ideas and philosophies we still follow to this day. One of the areas that they were especially influential in are the arts.

Ancient Greeks were masters of art; so much so that they are still studied to this day.

During the span of Ancient Greek society, there were three distinct artistic periods. These three periods are known as the Archaic, Classical, and Hellenistic periods.

This is the earliest phase of Greek art. It took place in the eighth century BC and lasted until 480 BC.

During this period, the artwork became a more naturalistic mode of expression. This was very different from earlier works, which had been much more rigid. Sculptures during this period had very animated faces. The bodies were made to show human proportions accurately.

Any statue of a man during this period was known as a Kouroi. Statues or sculptures that depicted women were called Korai.

All of these statues had similar features. They would usually be shown standing stiffly with their hands at their sides.

During this period, Greek artists and sculptors refined their craft. Statues became less rigid. It began in 510 BC and lasted in 323 BC.

In fact, most statues and sculptures made during this time period were much more relaxed or even shown in action scenes.

Greek artists and sculptors continuously tried to render human and animal forms as realistic as possible during this time period.

They did this by studying human anatomy and how a person’s body moves when they change poses. This allowed them to create much more lifelike statues.

Something else that is commonly associated with the sculptures of this time period is calm and passionless faces.

In order to get such realistic figures, they needed to change the manner in which they made their art.

Instead of carving a figure directly from stone, artists during the classical period would make a clay figure first. They would then copy this design into stone.

The last period of Ancient Greek art, the Hellenistic period began after Alexander the Great’s death in 323 BC. It continued until 31 BC.

During this time period, Greek art was heavily influenced by the different cultures that they had conquered under Alexander the Great.

This period focused on new subjects, such as women, children, and common people rather than deities and rulers.

Hellenistic artists were able to copy and alter from all of the different works of art that came before. This gave them a good sense of their history, which influenced their works.

One of the biggest innovations during this time period was the artists’ ability to convey emotion through their sculpture.

While Classical works were usually stoic, Hellenistic art was full of emotions. 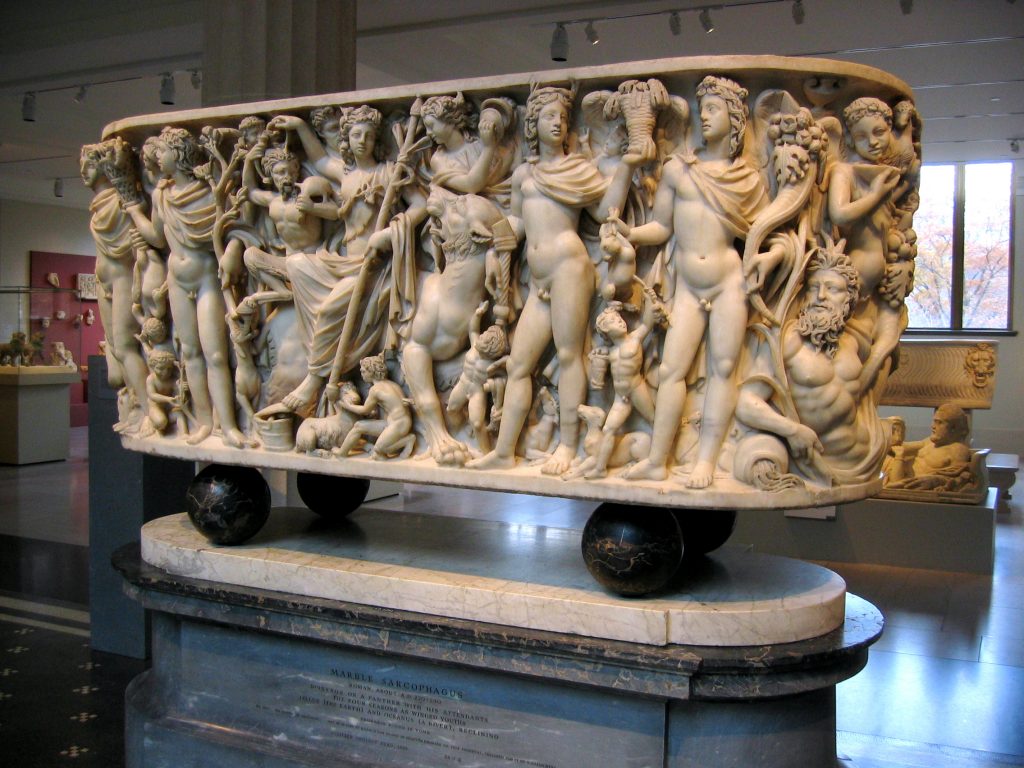 Ancient Greek artists loved to use many different artistic modes to express themselves. This included sculpture, columns, painting, and pottery.

Sculpture was perhaps the favorite mode of expression for Ancient Greek artists. They used this medium to show what the ideal human form would look like.

They wanted to create lifelike images of near perfect individuals and what they believed their gods to look like.

As such, the Greeks didn’t usually show human imperfections in their sculpture, which is very different from the Romans.

In Ancient Greece, art and architecture were significantly linked together. They were basically inseparable, and architects and artists were commonly one and the same.

One of the biggest ways that architecture was used to show off the artistic flair of Ancient Greek society was through the use of stylized columns.

These columns were used to hold up a structure and to decorate it as well.

There were three main kinds of columns used by the Ancient Greeks. These were the Doric, Ionic, and Corinthian styles.

Doric columns were usually used in plainer homes, while Corinthian columns were saved for buildings of special magnificence, as they are much fancier.

The only places that Greek painting has survived on are pottery and ceramics. These works show the intricate detail and high-quality of the work. Greek painters could create.

Most vases and pots were used to show ancient stories and epic tales, including many battle scenes from the earlier parts of Ancient Greek society.

There are not very many paintings left from Ancient Greece, even though it was one of their main artistic modes of expression.

This is because most of the paintings were painted on walls or wood panel, that have long since rotted away or been destroyed.