All great civilizations have their own particular flair for architecture that gets copied by many societies that come after them. This is especially true for Ancient Greece.

Their style of architecture can still be seen in government buildings, museums, and monuments throughout the world.

Ancient Greek architecture is well known for its tall columns, symmetry, harmony, balance, and intricate details. The Greeks liked to include these details in all of the buildings they constructed.

Perhaps the most influential and well-known aspect of Ancient Greek architecture is their columns. These beautiful pillars were used in government buildings and temples. There were three different types of columns. They are known as Doric, Ionic, and Corinthian.

Each style of the column was used for a specific type of building. Each type had grooves down the sides. This helped to give each type of column its own unique depth and feeling of balance.

The most common and simplest form of columns, Doric columns were also the thickest. They had no decoration at the base and were very simple at the top.

Doric columns were also wider at the bottom than at the top. This made them extremely strong.

These columns were a bit thinner than Doric columns. They had a decorative base at the top and the bottom.

The decoration at the top usually consisted of three scrolls on either side.

Due to its thinner proportions, Ionic columns were usually used for smaller buildings to give them a more elegant appearance.

This was, by far, the most decorative of the three orders of columns. The top was decorated with leaves of the acanthus plant and scrolls.

This style of column came about later in Ancient Greek society. As such, it was heavily copied by the Ancient Romans.

The Greeks were known for more than just their columns when it came to architecture. These other elements were first employed by the Greeks and copied by later societies.

The capital was a design at the top of the column. If you are trying to figure out what type of column you are looking at, the capital is your best clue.

The frieze was a decorative panel above the columns of a building that held sculptures. The sculptures often told the story of an important event.

The pediment was a triangle located on the front and back of a building above the frieze. It usually contained sculptures for decoration as well.

The cella is what the Ancient Greeks called the inner chamber of a temple.

This was a gateway or entrance to a temple. See how it looks in the Acropolis, where it was designed between 437 and 423.

Ancient Greek temples are world renowned for their beauty and simplicity. They were usually built so that the outside was surrounded by a row of columns.

Above the columns was a decorative panel, which the Ancient Greeks called a frieze. Finally, above the frieze, there was a triangle shaped area.

In this area, which was called a pediment, there would be sculptures related to the god or goddess to which the temple was devoted.

Inside of the temple, there was an inner room or chamber that housed the actual statue of the god or goddess off the temple.

The most famous example of an Ancient Greek temple is the Parthenon, which is located on the Acropolis in Athens. 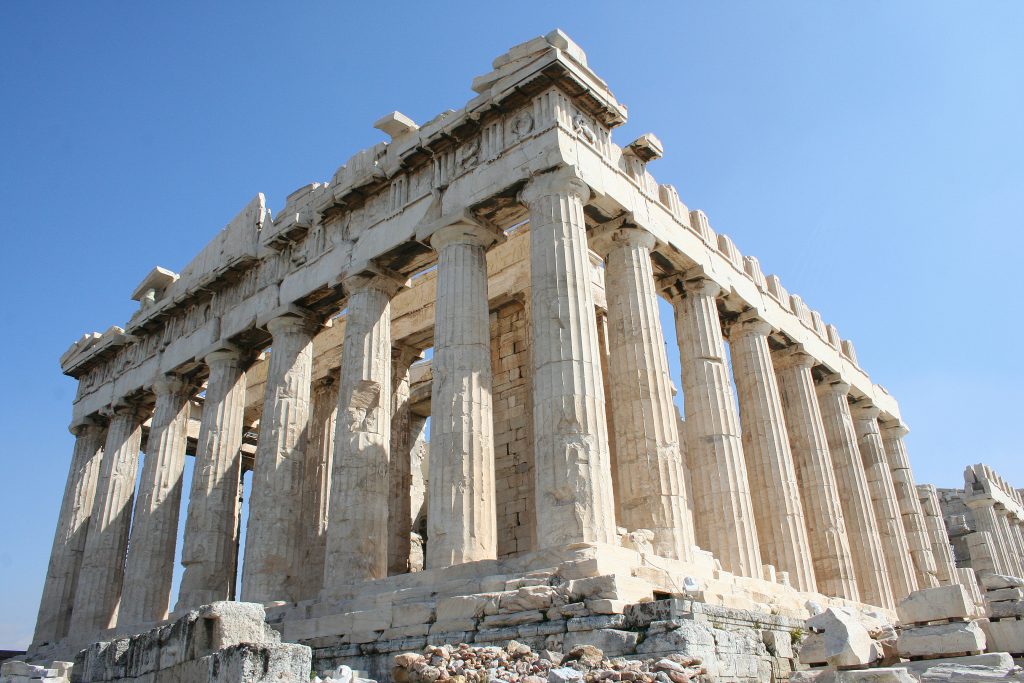 This temple was built to honor the goddess Athena. It was built in the Doric style of architecture.

It had 46 outer columns supporting its roof. Each of these columns was six feet in diameter and thirty-four feet tall.

The inner changer contained a large statue of Athena. This statue was made out of gold and ivory.

Aside from temples, the Ancient Greeks made many other types of buildings. Each of these buildings still reflected their ideas of balance and harmony.

One of the other most important types of buildings that Greeks would make were theaters. These could range in size, with the largest being big enough to seat 10,000 people.

Not only were these theaters beautiful to look at, but they were also well-designed. The acoustics were so well planned out that even people in the back row could hear the actors.

The Ancient Greeks also built covered walkways for merchants to sell goods and for people to hold public meetings. These walkways were known as “stoas.”