Albert Einstein was probably the most famous scientist of the 20th century.

One of his most important theories was his Theory of Relativity. Most people have heard of E=MC2, but what does it actually mean? Read on to find out! 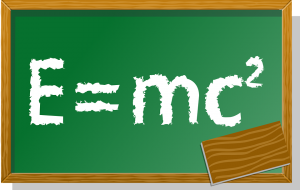 There are two main ideas that make up the theory of relativity.

The principle of relativity:

The laws of physics are always the same for any reference frame.

The principle of the speed of light:

Light always has the same speed in a vacuum. This will not change based on the observers or the motion of the source of light.

What does relative mean?

Now, that might sound a bit confusing! Einstein was the first to claim that all motion was relative.

What this means is that the measurement of motion depended on the relative velocity and position of the observer.

Basically, things will appear to travel at different rates based on whether you are moving or still. An Example of Relativity

Imagine that you are driving in a car with a bird flying past you going the same speed as your car. This will make it appear as though the bird is not moving.

This, of course, will change the second that you come to a stoplight. The bird, which seemed to be stationary, will continue on its path at the same speed as before.

The speed of the bird depends on the “relative” position of the observer. It will be different for a person in motion than it is for a person who is stationary.

What does E=MC2 mean?

In the equation E=MC2, each of the letters stands for something else. In this formula, E is energy, M is mass, and C is the constant speed of light.

This equation helped to show that energy and mass are related. If there is a change in an object’s energy, that will also cause a change in its mass.

This concept became important in developing nuclear energy and the atomic bomb.