Each layer is a little different from the other, but they all can affect life on Earth. 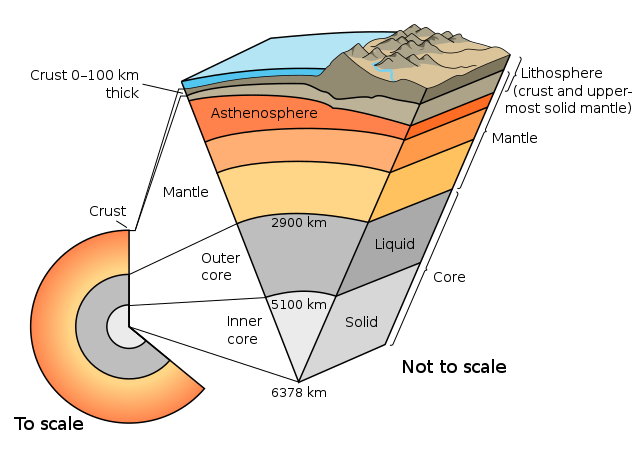 The inner core is at the very center of Earth. It is mostly a giant, dense ball of iron. The inner core has a radius of 758 miles.

The temperature of the inner core is 9,392 degrees Fahrenheit. That is about 6,000 times hotter than temperatures we experience on the surface!

The inner core is under an immense amount of pressure. The iron found at the inner core should be liquid because of the incredible temperature, but the pressure is so strong that the iron atoms cannot move from a solid state. 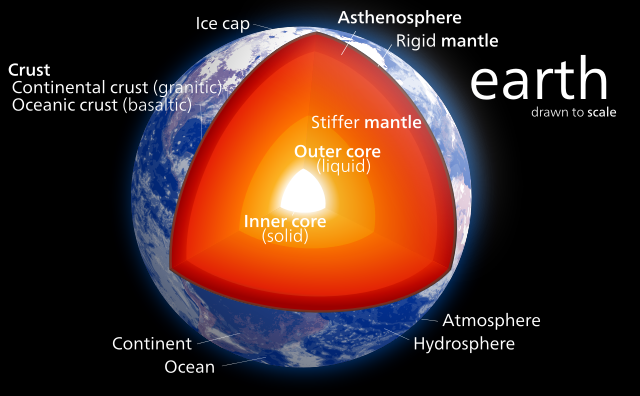 The outer core separates the inner core from the mantle. It is made of mostly iron and nickel.

The outer core is also a little cooler than the inner core. It has a temperature of between 8,132 to 9,932 degrees Fahrenheit.

Without the Earth’s magnetic field, solar wind from the sun would destroy the planet’s ozone layer.

The mantle is mostly solid. The rocks found in the mantle are compounds called silicates. An example of a silicate is garnet.

While the mantle is mostly solid, it can still move. Around tectonic plates there is a huge amount of pressure that causes the mantle to move over a very long time.

There are four separate areas of the mantle: the upper mantle, the transition zone, the lower mantle, and “D Double Prime.”

The upper mantle is the area closest to the crust. It is the coolest part of the mantle and is mostly solid.

The transition zone is the area found between the upper and lower mantle. It is between 255 and 410 miles beneath the Earth’s surface.

The lower mantle is found between 410 and 1,678 miles beneath the surface. It is hotter and denser than both the upper mantle and the transition zone.

“D Double Prime” is the area that separates the outer core from the lower mantle. In some places it is very thin, and in other areas it is thick with rock and iron.

The thinnest layer of Earth is the crust. There are two parts to the crust: continental crust and oceanic crust.

The oceanic crust is thinner than the continental crust. It is about 5 miles thick and made up of a rock called basalt.