The heated air is delivered to large buildings like offices, factories, and hotels or individual homes. Geothermal heat is also used to heat greenhouses, to dry crops like tobacco and fruit, to warm water for fish farms, and to pasteurize milk. What is needed is a geothermal heat pump, ducts and fans to conduct air flow, and a heat exchanger. 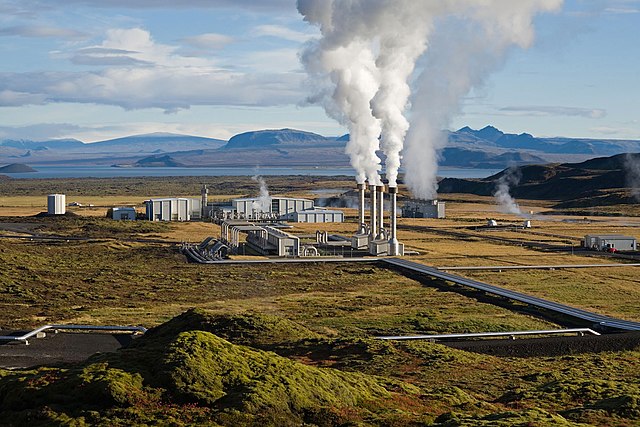 Geothermal heat can be found anywhere on earth at depths of 3 to 5 miles and in some places less than that. This heat can be used to generate electricity by using steam or hot water produced by injecting water to the hot rock formations through one drilled well hole and collecting the steam that is produced from another adjacent hole.

Geothermal power is clean, reliable, replaces the need for fossil fuels, and has proven to be cost effective. The largest geothermal plant in the world is located north of San Francisco, California. It is called the Geysers Geothermal Complex and it contains 18 power plants. When geothermal energy is used, it is not subject to world market prices like oil and gas so prices are stable. Hot water and hot air heating is much quieter and needs less maintenance than furnaces and cooling units that require compressors and fans. Geothermal heat pumps can operate year round and are not affected by weather.

The most significant hindrance to implementing geothermal energy is the upfront costs to build the power plants and to install systems in existing buildings. If geothermal energy is produced by wells and water, it takes a staggering amount of water and therefore, this limits the areas that could be chosen to dig the wells.

Installing geothermal systems to new-builds is easier than retrofitting existing buildings because excavating is necessary and can increase the costs significantly. Also the unforeseen damage to tree roots could be expensive to repair or replace. Heat pumps for geothermal heating still require electricity.

The number of companies and the number of technical installers are limited at this time. This will improve when there are more companies involved in geothermal systems.

We are closer than ever to not needing fossil fuels for heating. With the development of systems, technologies and money being funded for research, geothermal energy will be accessible to countries willing to take the plunge. It is inconceivable that geothermal energy will not be one of the most important sources of electricity and heat in the very near future.