Coral reefs are often called the rainforests of the sea due to their large biodiversity.

There are three forms of reefs: fringing, barrier, and atolls.

Fringing reefs are found off rocky coasts. Barrier reefs are found with a lagoon between them and the coast. Atolls completely encircle a lagoon, where no dry land exists within the lagoon.

How Reefs are Formed

Coral reefs need warm waters (between 68 and 82 degrees Fahrenheit) to develop. They also rely on waves to bring nutrients and oxygen to the reef. Stony corals live in colonies and reproduce asexually. They split, creating two genetically identical corals that are connected by a small piece of tissue.

Coralline red and green algae grow all over (and within) the stony corals, acting as a glue holding everything together. The stony coral provides a home for the algae and the algae produce food and oxygen for the corals.

The corals come in a variety of shapes and colors. The color of a coral is due to the algae that is within it.

Other than coralline red and green algae, other plants are found in coral reefs, including other forms of algae.

Seagrasses are another important plant in coral reefs. Seagrasses block sediments from getting in the water near reefs. They also act as a home and food source for animals in the reef. 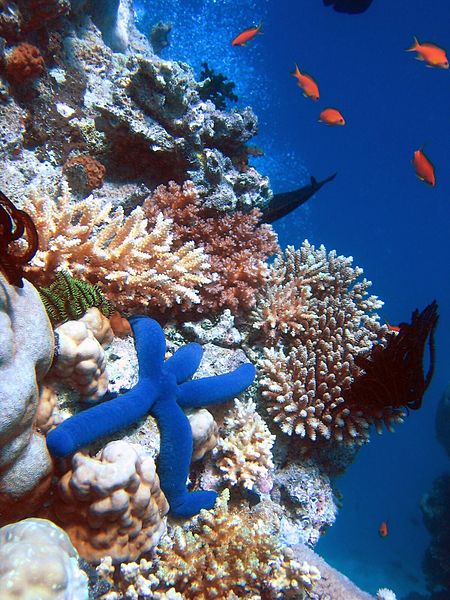 The stony corals are the most important animals in a coral reef, but there are many other animals that make their home in reefs. Many of them are invertebrates like other forms of coral, sponges, sea urchins, crabs, and sea stars.

It is estimated that 25% of all fish in the ocean rely on coral reefs. These fish use the coral reef for protection, a source of food, and a place to reproduce.

Stony corals and algae are not the only symbiotic relationship found in coral reefs. Another example is found between the anemonefish and the sea anemone. The sea anemone provides a place for the fish to lay its eggs, and the fish protects the anemone from predators.

Other animals that make their home in coral reefs are: rays, octopuses, and sea turtles.