The majority of cells have components such as a cell membrane, cytoplasm, and a nucleus. They also contain mitochondria, ribosomes, and lysosomes.

Mitochondria is a plural word; the singular form of the word is mitochondrion.

Mitochondria provides energy for the cell by metabolizing food and oxygen. Different kinds of cells can have different amounts of mitochondria, depending on the energy that they need for their functions.

More simple cells and single-celled organisms might only contain a single mitochondrion. However, more complex cells, like animal cells, which require a lot of energy to do their jobs, might have thousands of mitochondria within one cell. How do mitochondria produce energy?

With energy production for the cell’s functioning being the most important process for mitochondria, they are often referred to as the “energy factory” or “powerhouse” of the cell.

There is a specific type of molecule that helps the mitochondria do their job, called ATP, which is an acronym for adenosine triphosphate.

This means that the molecule contains adenosine and three phosphate particles.

The process of creating ATP involves the use of oxygen, in a system called cellular respiration. Therefore, cells engage in respiration, or breathing, just like we do.

The mitochondria gather oxygen to combine with carbohydrates (a nutrient found in many foods) to create the ATP. What is the structure of mitochondria?

The purpose of these folds is to increase the surface area of the membrane, so that it can do more with less space.

Finally, the matrix of the mitochondria is the space in between the cristae, inside the inner membrane. In the matrix, mitochondria store their own proteins, ribosomes, and DNA. 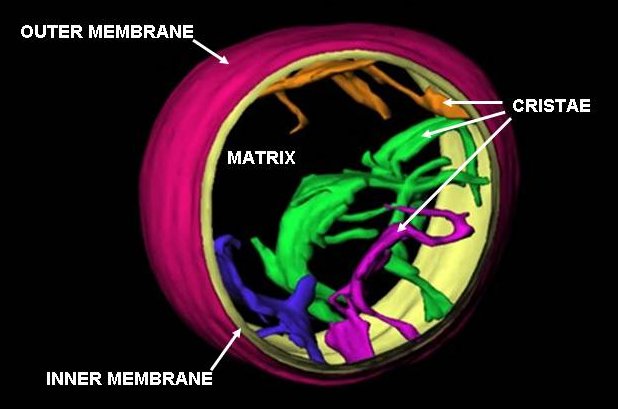 Although the primary function of the mitochondria is the production of energy, mitochondria also engage in other important functions for the cell, such as regulating metabolism, releasing heat, and controlling some of the flow of important substances in the cell such as calcium.