Humans wouldn’t last very long without oxygen. The respiratory system is the body’s way of bringing oxygen to the tissues and organs that need it and ridding the body of carbon dioxide.

There are many organs that make up your respiratory system. Some of the major ones are: nose, mouth, lungs, alveoli, and diaphragm. 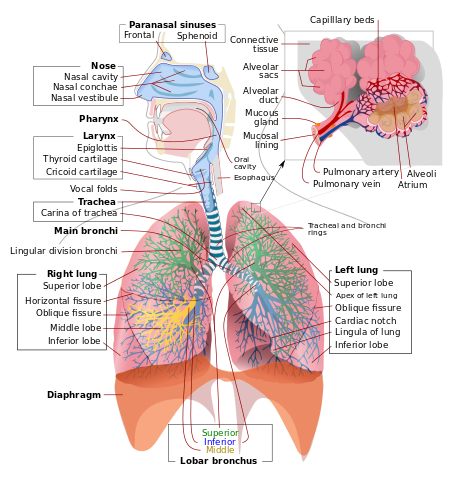 Your nose and mouth allow you to breathe. Most of the air that you breathe enters and exits your body through your nose. When you are sick or are exercising it is common to breathe mostly through your mouth.

Once air is in your nose it travels through trachea on its way to the lungs. The trachea is also called your windpipe.

Your trachea splits into two tubes with one connecting to each of your lungs. These tubes are called bronchi.

Your lungs are located behind your ribs and they perform a very important job. Lungs allow oxygen to enter your bloodstream. They also remove carbon dioxide and allow you to exhale it from your body.

As the bronchi enter the lungs, they get smaller and smaller. These tiny tubes are called bronchioles and they spread out within each lung. There are about 30,000 bronchioles in each lung, with each bronchiole being about as thick as a strand of hair.

Your lungs both allow you to breathe, but they are not identical. Your right lung has three parts, or lobes. Your left lung only has two. 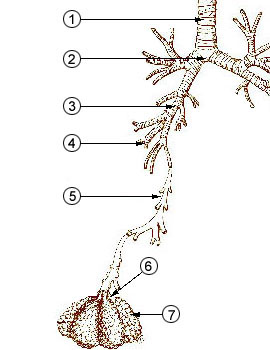 When you inhale, oxygen travels to very small air sacs located at the end of each bronchiole. These sacs are called alveoli.

Within each alveolus there are blood vessels called capillaries. These capillaries allow oxygen to attach to the red blood cells in your bloodstream. The blood then travels through the pulmonary artery to your heart.

Your heart is a large, powerful muscle that pushes blood throughout your body. Without blood, the tissues and organs in your body would not be able to do their job and die.

When you inhale, your diaphragm flattens to allow your lungs to expand, making room for the incoming air.

When you exhale your diaphragm expands. This forces the air in your lungs to push up through your trachea and exit your nose or mouth. 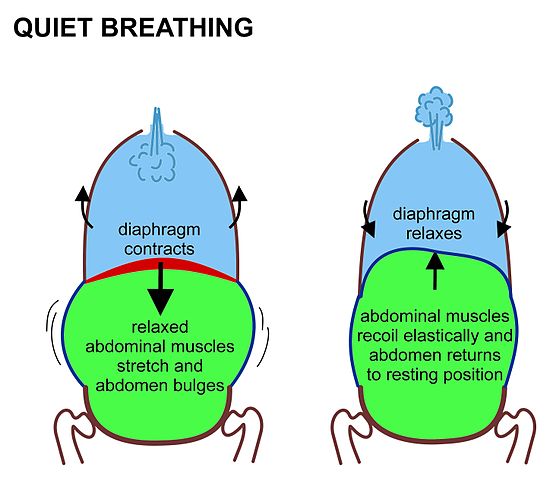