The life cycle of the yellow jacket includes: eggs, larvae, pupa, and adult. While in the larvae and pupa stage, they are fed and protected by worker wasps within the nest.

They have brightly colored abdomens featuring yellow stripes. The bright markings serve as warning to other creatures including humans. They are often mistaken for hornets.

The female of the species has a stinger at the end of the abdomen. The stinger does not have barbs so the yellow jacket female can sting many times. They also have strong mandibles and can bite as well as sting their victims. They eat insects and spiders and love sweet fruit and juices. They are attracted to meat and fish and will swarm over a barbeque.

You can identify the difference between a bee and a wasp because the connection between the thorax and abdomen of a wasp is very tiny. This connecting tissue is called the petiole. 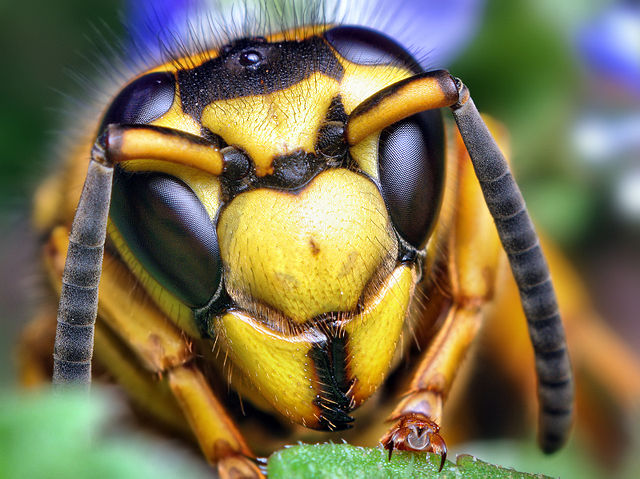 Like bees, each colony has one queen, drones, and workers. In spring, a nest is built with wood fibre that has been chewed and mixed with saliva. This produces a paper-like substance that is used to construct a nest that has many paper-thin layers.

The resulting nest can be any size and some are so large they may look like a grey football. The queen will lay hundreds of eggs which are fertilized by the drones.

The queen is the only one that survives the winter. In spring, she will gather wood fibre and make a small nest to begin a new colony. She lays eggs and sterile females hatch that are the new worker wasps. They begin enlarging the nest, forage for food, and are ready to look after the queen’s future offspring.

The queen lays more eggs and fertilizes half of the eggs with sperm that she has saved in her body over the winter. The eggs that were unfertilized become the drones of the colony. 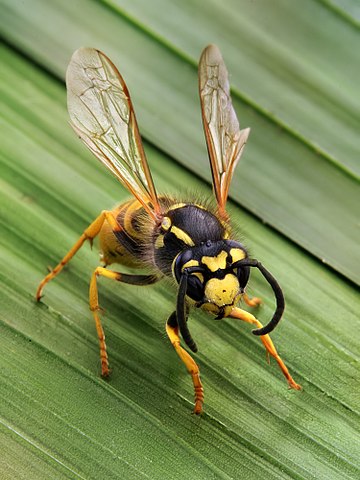 Yellow jackets are extremely aggressive. They often will attack even when there is no apparent threat. If something tries to fight them off, they will counterattack more viciously. Nests are often built along fences, in a bush or tree, and under overhangs on houses.

Although the yellow jacket wasps are bothersome, they are an important part of the ecosystem because they eat other pesky insects. However, if you discover a hornet nest in your garden or under the eaves of your house or garage, it is best to destroy it.

One safe way of doing this is to block up the entrance at night and the wasps, including the larvae and pupas will die because of lack of food. Another alternative is to call an exterminator. Do not ever hit the nest or break the nest by swatting at it. The wasps will swarm and retaliate and you will be the loser.