Tarantulas are found in most areas of the world, including deserts. The tarantula is an arachnid, a type of spider. Most are burrowers. Some live in trees and spin a silk tent to hide in. They are nocturnal hunters. They typically target insects, but they can also go after bigger prey including toads, frogs, and mice. Tarantulas can climb and use retractable claws at the ends of their legs. Females can lay up to 2000 eggs and can live up to 30 years.

They have hairy bodies and eight hairy legs and are not quick movers. They have 8 tiny eyes that notice the slightest movement. The hairs on their bodies are very sensitive to vibrations.

The tarantula also has hairs on its abdomen and when they stand upright on their hind legs, they scratch their abdomens to throw the hairs at a predator. The hairs are covered with tiny barbs which are very painful especially if they hit the predator in the eyes or skin.

The tarantula does not spin webs like other spiders. However, they can spin a trip wire that will alert them underground that a prey has walked close to its den. The tarantula will grab the prey with their strong legs and use its fangs to inject venom into the prey to paralyze it. Then they bite with their fangs. They crush their prey with their fangs and at the same time they secrete an enzyme into the prey to liquefy the body so they can suck it up by using their straw-like mouths. The jaws of the tarantula move up and down, which is completely different to other spiders whose jaws move from side to side.

The male tarantulas will follow the trail of silk the female leaves behind her. After mating, the female tarantula carries her eggs in a cocoon of silk attached to her body. The growth of the newly hatched spider is a very long process and can be as long as 10 years.

The tarantula has few enemies. One in particular is the pepsis wasp which will sting and paralyze the tarantula. It then lays its eggs on the spider’s body. When the wasp eggs hatch into larvae, the larvae will use the living tarantula as food.

Tarantulas shed or molt their exoskeletons often while they are young and perhaps once a year as an adult or will molt if they lose a leg or some of their hair. During a molt, they can regrow lost legs or replace internal organs. The male adult never molts. 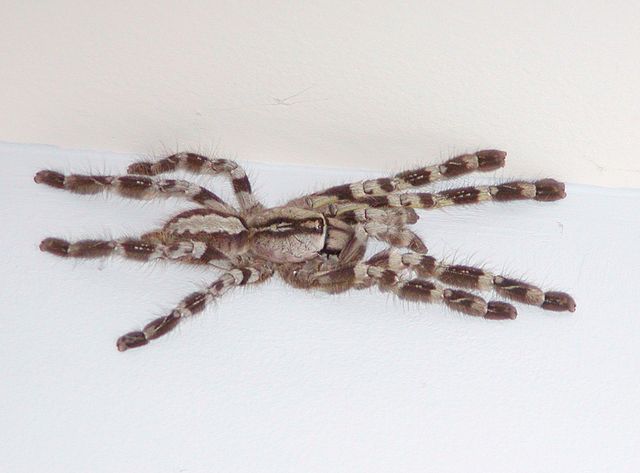 There are thought to be more than 800 species of tarantulas and they vary in size depending on the species. They can be 1 to 4 inches long and have a leg length of 3 to 10 inches. The largest tarantula has 10 inch legs and is called the Goliath Birdeater.

Tarantulas are poisonous. Some will give a bite that is similar to a bee sting and others’ bites have been known to make a human very ill.