The swordfish’s most recognizable characteristic is its long, sharp bill that looks like a sword. That bill makes up about one-third of the entire length of a swordfish. Besides helping them hunt, this bill also helps them move through the water more smoothly.

The longest swordfish was about 15 feet long, but the average fish is more like 10 feet long. They can weigh over 1,000 pounds. Female swordfish are longer and larger than the males.

Swordfish are blue and/or gray with a lighter color under their belly. The belly is slightly lighter because this helps them blend in with their surroundings if seen from below. Most predators who would be able to feast on such a large fish would be lurking below where the swordfish usually swims.

One special adaptation swordfish have is an organ found between their eyes. This special organ helps keep their eyes, brain, and head warm when they are swimming in colder, deeper waters.

Swordfish can be found in many oceans. Three of their most common areas to live are the Indian, Atlantic, and Pacific oceans. Much like humans, they like to live in warmer climates during the winter and colder ones during the summer. Sometimes they migrate to achieve this perfect habitat. 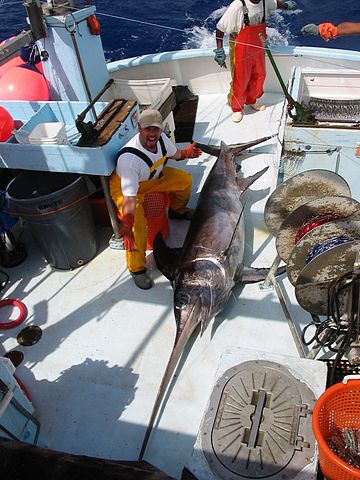 Swordfish can eat a variety of fish because when they want to attack larger fish, they use their sword-like bill to attack. They can even feast on octopus and squid. Sometimes, however, they simply eat much smaller fish.

Swordfish usually eat during the night. They like to spend their time in deep water, but to catch food at night they will often swim toward the surface in search of prey.

Unlike the swordfish in the movie Finding Nemo, most swordfish prefer to live alone instead of interacting with others in a group.

Swordfish are very stubborn and strong. If they are caught by fishers, they are known to pull the linke and fight against being reeled in. However, they have never been known to attack humans in the water unless they feel threatened.