The Poodle is a common, well-loved breed of dog that can be found in a wide variety of colors and sizes. It is known to be the second most highly intelligent dog, almost as intelligent as the Border Collie.

Poodles have a breeding history that goes back many years. They were initially bred as hunting dogs or bird dogs in Germany.

They were found to be particularly good hunting partners, especially near water, where they would hunt down and retrieve fallen birds (such as ducks) for their owners.

Originally, all poodles looked like, and matched the size of, the standard poodle. 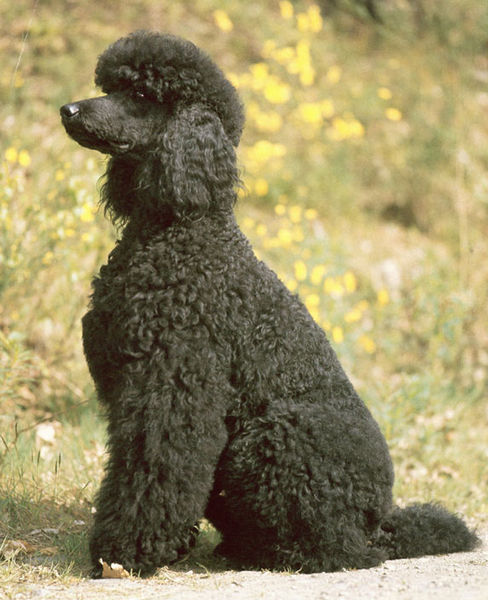 A poodle’s short, curly fur was typically cut into a “poodle cut,” which means shaving certain areas around their ankles, tail, and back end.

The purpose of this practice was to aid in swimming and movement through water, while still allowing the fur to keep the dog mostly warm.

Because of their cut and their shape, poodles are known to be very good swimmers.

Poodles are some of the most diverse dogs, because they come in three drastically different sizes. The different sizes are determined by their different heights, according to how tall they stand up to their shoulders.

Poodles’ fur is curly and doesn’t shed. This does mean they need to get their hair clipped and brushed regularly, but it also means that they are considered hypoallergenic, or safe for people with allergies to dog dander.

Poodles’ coats come in many different colors. Many of them appear all in one color, such as black, brown, white, red, or ivory, but there are also a type called “party poodles,” that come in a multicolored coat.

These are typically brown, red, and white. Poodles do very well as pets in family homes. Like many other breeds of dogs, they are highly intelligent and very active, so they would do best in homes where the people are also active and have the time to train their poodles.

Poodles are generally friendly, and they can be very affectionate towards their owners. They are quite obedient and are considered good dogs to have with children. They are also some of the easiest dogs to housetrain. However, poodles can sometimes be territorial when it comes to protecting their families.

It is believed that the smallest poodles were bred this way so that they could sniff for truffles, but it is just as likely that they were bred to be small for their appearance.

Poodles are often depicted in TV shows and movies as being French, and rightly so, because they are the national dog of France.

Poodles have been around much longer than many other breeds; they were being bred all the way back in the 1500s.