Let’s explore these and other fascinating facts about polar bears! At the end, be sure to try our fun coloring activity! Polar bears are Earth’s largest carnivorous (meat-eating) mammals on land. They are about seven to eight feet long, and male polar bears can weigh up to 1,700 pounds.

Below the skin, polar bears have a thick layer of fat to trap heat and keep them warm. They have strong legs and large, slightly webbed feet.

The webbing between their toes helps polar bears swim and walk on ice.

To keep them from slipping on the ice, the bottoms of polar bear’s feet have a sort of “non-slip” surface. Their feet also have fur on the bottom so they don’t get too cold.

Since polar bears spend so much time in the water, they are considered marine mammals, unlike other bears.

Where do polar bears live?

Polar bears live in Canada, Alaska, Russia, Greenland, and some islands that belong to Norway. They occur both north and south of the Arctic Circle.

However, the largest population of polar bears live from north of the Arctic Circle to the North Pole.

Polar bears spend most of their time on sea ice, swimming between floating ice islands when necessary. However, they will spend time on land if sea ice is not available. 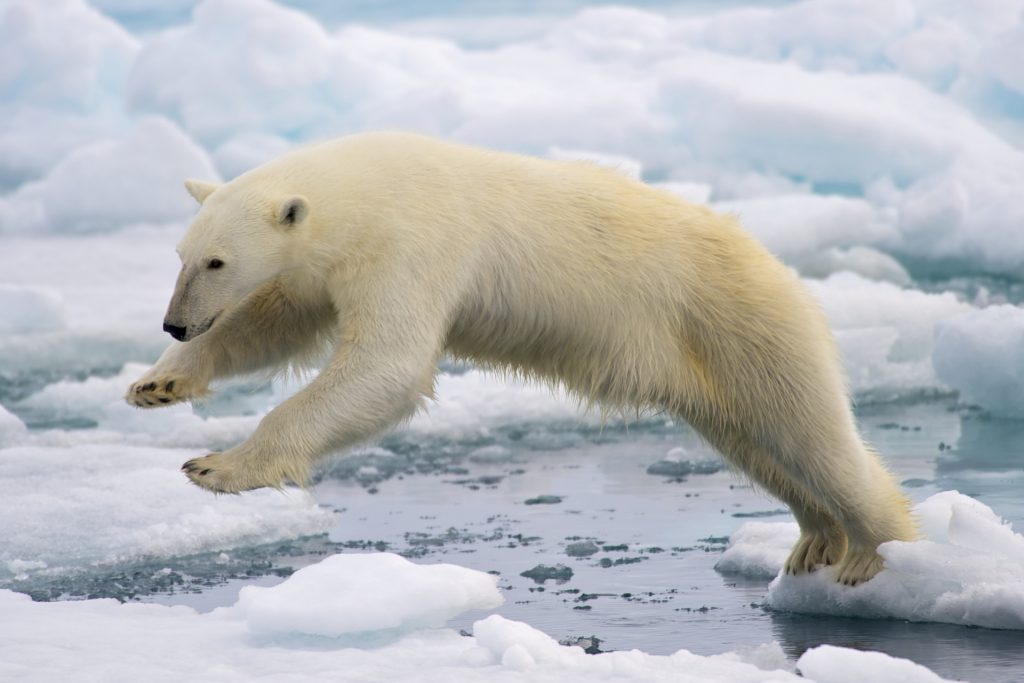 What do polar bears eat?

Polar bears mostly eat ringed seals, but they will eat bearded seals too. They will also eat whale and walrus carcasses and bird eggs.

To hunt seals, polar bears wait until they swim to the surface of the sea ice to breathe. They then grab the seal and drag it out of the water to eat.

Polar bears are at the top of the Arctic food chain. That means although they eat many other animals, no other animals eat them.

How do polar bears behave?

Unlike most other animals, polar bears usually live alone.

However, female polar bears sometimes raise their cubs in a family group, and polar bear cubs are known to socialize and play with one another.

When pregnant, female polar bears will dig a den in a snow bank. There, they usually give birth to two cubs, but the number may range from one to four cubs.

A newborn polar bear weighs just 1.5 pounds. At first, polar bear cubs must depend completely on their mothers for survival.

They stay with their mothers until they are about two and a half years of age.

Polar bear mothers can produce a litter of cubs every three years. However, this is only possible if she has enough fat reserves built up.

Females aggressively protect their young, but male polar bears do not help with protecting or raising polar bear cubs. What is the polar bear population?

When ice melts too early in the year, it cuts short the polar bear’s seal hunting season.

While the polar bear is forced to live on land, it eats very little food.

Because it’s difficult for female polar bears to build up their fat reserves, they have fewer cubs. The cubs they do have also have a lower survival rate than they once did.

The U.S. Geological Survey predicts that two thirds of polar bears will disappear by 2050.

Try coloring in the picture of a polar bear. You can use white, cream and maybe some brown – or other colors you might fancy using to bring the bear to life!