Penguins are a type of bird that is most known for living in cold weather environment and for swimming instead of flying. In fact, penguins usually spend around half of their time swimming in very cold ocean waters.

Penguins are very good at swimming. They can reach very high speeds in the water, and they are capable of diving down quite deep when hunting for food, in addition to leaping out of the water to escape predators. There is some variation in appearance for different breeds of penguins, but in general they are smaller birds (the largest only reaches 3 feet in height). They have black and white feather patterns, and their wings are flippers.

Their color pattern is very useful for defense against potential predators, such as orca whales. The reason is that their darker feathers on their backs makes it hard to see them from above, where they blend in with the dark depths of the water.

Their lighter feathers on their bellies makes it hard to see them from below, where they blend in with the lighter colors of the ocean where the light from the sun shines down. Where do penguins live?

It’s common to think of penguins in Antarctica, but they also live in several other parts of the Earth’s southern hemisphere. In fact, penguins can be found in parts of South Africa and Australia as well.

Penguins spend so much of their time in the water, and make their habitats in and around the ocean, so it is not surprising that their diet mainly consists of fish. Penguins have also been seen to eat octopus, squid, and several types of crustaceans, such as shrimp.

Taking care of their offspring

Penguins, like most birds, lay their eggs in the springtime, usually in the same location every year. Something unique about penguins is that both the mother and father penguins will take turns warming the eggs: it is not the sole responsibility of just one of the parents.

Penguins also spend time with their chicks after they hatch to keep them safe from any potential predators for several months. Penguin chicks are easily identifiable from their very fuzzy appearance, as their water-resistant feathers do not grow in until later. 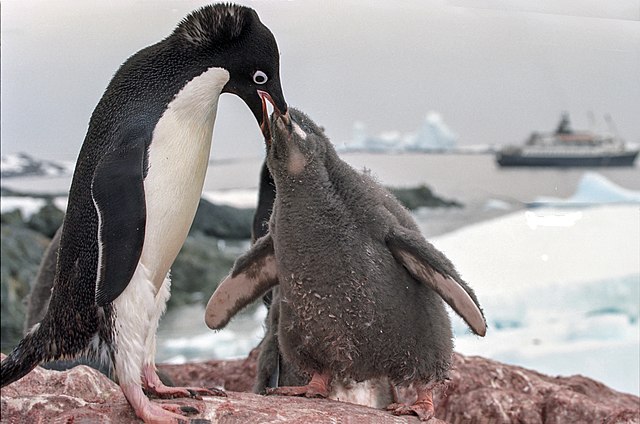 Because penguins live nearby the ocean and spend so much of their time in the water, it is very fortunate that they are able to drink salt water, unlike humans.

Penguins have to hold their breath when they dive under the water, but some breeds, such as the emperor penguin, can do this for 20 minutes.