Hamsters are rodents that many people like to keep as pets. The Syrian hamster, also known as the teddy bear hamster, is the most common hamster for pet owners.

There are 24 species of hamsters. The first hamsters to be sold as pets in the United States were brought to the country in 1936. Hamsters are rodents and like to spend much of their time underground. They will dig burrows with multiple entrances. Their burrows will contain several chambers for nests and food storage.

Hamsters were first discovered in Syria. They can be found in the wild in Europe and Asia.

Since they are diggers, hamsters prefer semi-desert environments with soft soil. They can also be found in rocky regions, sand dunes, and the edges of deserts. Hamsters burrow into the ground to keep themselves cool from the hot sun.

Hamster size changes based on the species. The most well-known hamster is the Syrian hamster. It usually grows to a length of 6 inches.

Some of the biggest hamsters are from the European breed and they can grow up to 13 inches in length. The Russian dwarf hamster is one of the smallest and it is only 2 to 4 inches long.

Hamsters have short, stout bodies with furry ears and short limbs. The hamster’s tail is relatively short and is shorter than the hamster’s body length.

Hamsters can come in a variety of colors. They include white, grey, black, brown, red, and yellow.

Hamsters are omnivores that eat mostly seeds, grains, nuts, fruits, and vegetables. They will also eat insects, and smaller animals such as frogs and lizards.

Hamsters have pouches in their mouth that they will use to carry food back to their burrows.

A hamster’s teeth are continuously growing. They need to chew on wood or twigs to grind their teeth down. If they don’t they can injure their mouth and lips.

Hamsters are nocturnal animals. At night they will leave their burrows to go out looking for food.

Most hamsters are solitary creatures. The Syrian hamster is highly territorial and will attack any other hamster that enters its area. The dwarf hamster, on the other hand, is highly sociable and enjoys other hamsters.

Hamsters will bite when they are scared, or if they have been woken up.

Mother hamsters are very protective of their young. If she fears for her young, she will place them in her mouth and move them to safety.

As they spend much of their time underground, it is no surprise that hamsters have very poor eyesight.

Hamsters are a popular first pet for children because they are easy to take care of, have a calm nature, and are quite small.

Hamsters have a lifespan of 2-3 years.

They reproduce very quickly. Females will have 2-3 litters in a year. Each litter will have up to 13 young.

Baby hamsters are blind until they are two weeks old. 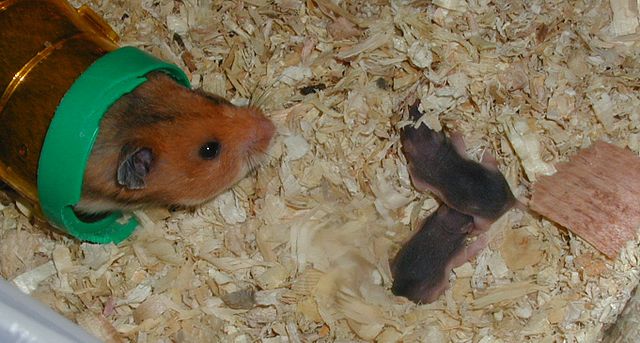