The name for the gold poison dart frog comes from the fact that indigenous people of Columbia use its venom for dart guns. The frog is also called the gold poison arrow frog. These amphibians are found near the Pacific Ocean in the South American country of Columbia. They enjoy warm temperature and lots of water, so they makes their home in the rainforest.

The gold poison dart frog lives in groups between four to seven. These small groups are called armies.

While most frogs are nocturnal, the gold poison dart frog is active during the day. This is partially as it shows their predators their bright skin and to keep their distance.

Growing between one and two inches, the gold poison dart frog is not very big. In fact, they weigh about one ounce.

They are also not all gold. They come in a variety of colors, from green to yellow to orange.

Their colors are used as a warning to predators. They are poisonous, so don’t eat them. This  defensive adaptation is called aposematic coloring.

Despite their small size, the gold poison dart frog is actually one of the largest of the more than 100 poisonous frog species in the world. 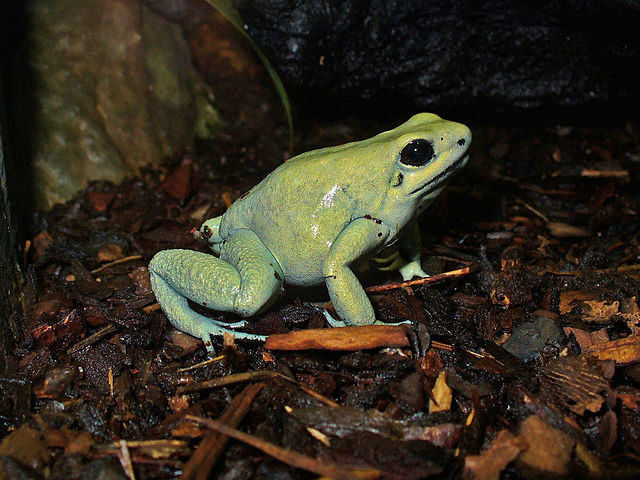 Gold poison dart frogs eat flies, crickets, ants, termites, and beetles. This specific diet gives the frogs their poison. They use the tongue to catch these insects as they pass by.

Scientists aren’t certain how exactly the frogs develop their poison. They believe it is from their diet, and that maybe the insects they eat absorb it from poisonous plants.

Life among gold poison dart frogs is never dull. Males will wrestle with other males to protect their territories. Females will fight over the best place to lay their eggs.

Unlike other frogs, the gold poison dart frog spends much of its life on land and not in the water.

Due to their brightly colored skin, the gold poison dart frog does not have many natural predators. Their biggest threat comes from the destruction of their habitat by human beings. They reside in a very small portion of the rainforest in Columbia which is being encroached upon by people.

The life expectancy for gold poison dart frogs in the wild is unknown. They typically live between 8 and 15 years in zoos.

Females lay eggs in dark, moist areas like under a leaf. Both parents help to protect the eggs from predators.

Once hatched the tadpoles do not have the poison in their skin and are susceptible to predators. They become mature in about a year. 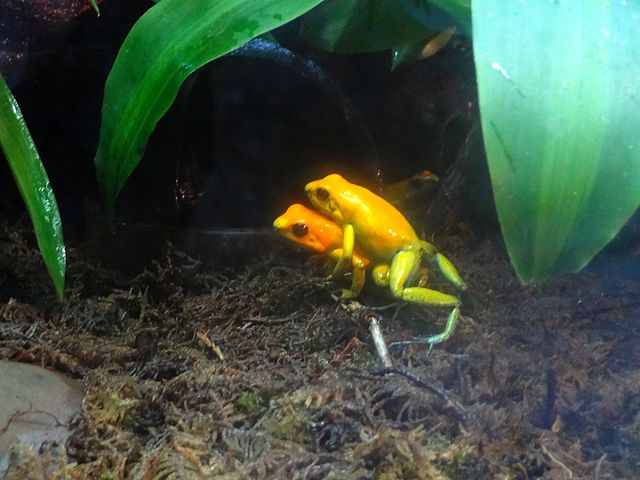