Giraffes are known for their long necks and beautiful spotted coats. But there’s much more to learn about this unique animal.

Let’s get started! Be sure to watch the short, interesting video on giraffes at the end of the article too. 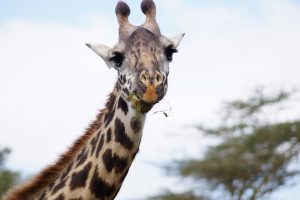 Giraffes are the world’s tallest mammals. Their legs alone are six feet tall! Most giraffes reach a height of 14 to 19 feet. Their famously long necks are six feet in length.

Even their tongues are almost two feet long.

They weigh 1,750 to 2,800 pounds. Giraffes have spotted coats. No pattern of spots is exactly the same. However, giraffes from the same area have coats with a similar pattern.

On the top of their heads, giraffes have “horns” that are actually knobs covered with hair and skin. They protect the giraffe’s head from injury. 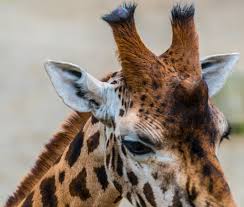 Where do giraffes live?

Giraffes live in central, eastern, and southern Africa. They can be found in the continent’s dry savannas. There, they roam among tall trees and open plains.

What do giraffes eat?

Giraffes sometimes eat grass, fruit, and vegetables, but their favorite food is leaves. They especially like the leaves of the acacia tree.

They feed 16-20 hours a day and are almost constantly chewing. They eat up to 75 pounds of leaves every day. Still, they can survive on as little as 15 pounds daily.

Because of their height, giraffes have no real competition for food. Their long necks make it easy to eat leaves that other animals can’t reach. 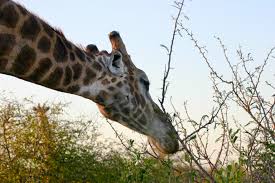 Acacia leaves contain lots of water, so giraffes can go days without drinking any water.

This is good news, because their long necks and long legs make it difficult for giraffes to bend down and drink.

This difficulty makes them vulnerable to predators while drinking. In groups, giraffes take turns drinking so the others can watch for dangerous predators.

Giraffes in captivity can drink up to 10 gallons of water daily.

Giraffes are social animals and live in large herds, usually of 10 to 20 animals. Some groups are as large as 50 giraffes. 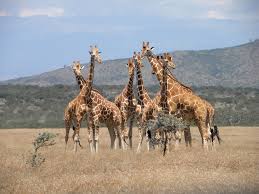 These herds are not organized and can contain males and females of any age.

Unlike most other species, the giraffes in a herd don’t always stay together. They can come and go as they please.

Baby giraffes, called calves, stay with their mothers until they are older, and some male giraffes prefer to travel alone.

Females give birth to one calf after a fifteen-month pregnancy. Infants can stand within 30 minutes and run with their mothers after just 10 hours. 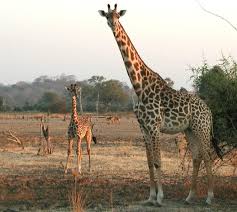 Giraffes are usually not noisy, but they can communicate with whistles, moans, and cough-like sounds. Calves do make a series of loud noises when they are in danger.

There are still 97,500 giraffes in the wild, but they are classified as a vulnerable species. Their numbers are decreasing.

Giraffes are threatened by the loss of habitat and the loss of the acacia trees they rely on for food. They are also hunted for their meat, hide, and even tails.

Young giraffes are often attacked by lions, hyenas, and leopards. Scientists estimate that only 25% of infants survive to adulthood. 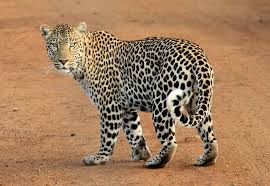 Other Interesting Facts About Giraffes 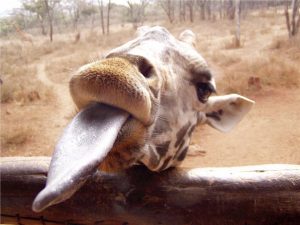 Interesting Video – Why are Giraffes Important?