The German Shepherd Dog (sometimes abbreviated as GSD) is one of the most popular dog breeds, as both pets and working dogs, in the United States.

They are known to be athletic, intelligent, loyal, protective, and friendly. 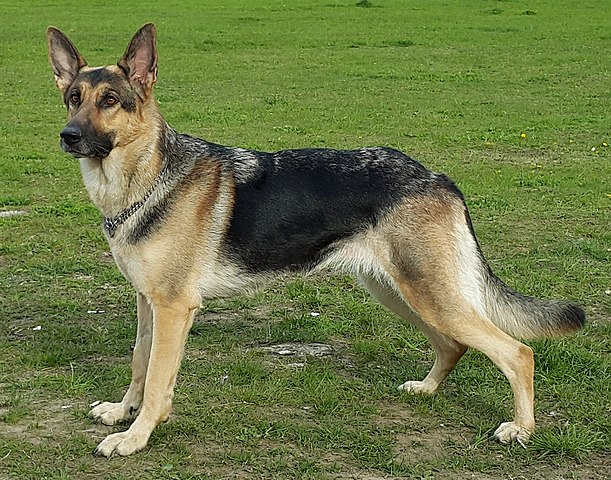 German Shepherds are considered to be large dogs. They typically can grow to approximately two feet tall, when measured up to their shoulders, and they can weigh generally between 50 and 90 pounds.

They have very large ears that stand upright. Like many large dogs, their bodies are slightly longer than they are tall, but they have well proportioned, muscular bodies.

German Shepherds can come in most any color coat, but the majority of them are tan and black, mostly tan, or a red/tan and black. Much less commonly, they can also come in all black, all white, or a sable pattern.

German Shepherd coats are double coats, which means that there are two layers to them, which serves the purpose of keeping them warm.

The outer layer of their coats shed year round, which means that they do not need to have their fur trimmed.

For the most part, they have medium or short length coats, although in rare cases they can have longer fur. 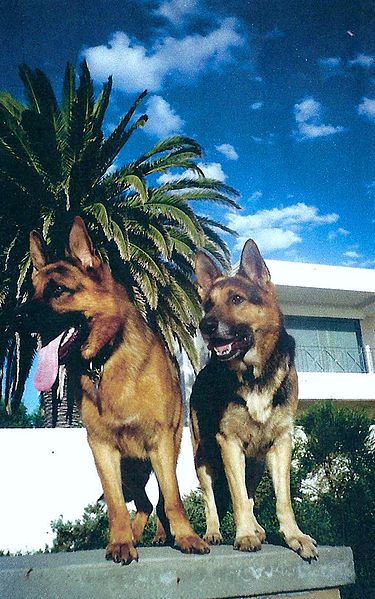 As their name suggests, German Shepherd dogs come from Germany. It is not a very old lineage, however, as the first German Shepherds were bred in 1899 and they did not come to the United States until 1907.

German Shepherds were originally bred to be working dogs, with the primary purpose of herding sheep and protecting livestock from predators.

For today’s purposes, they are still very commonly used as working dogs, due to their athletic and intelligent nature.

Today, German Shepherds are frequently used in the police and military. Like Border Collies, they are highly trainable and eager to learn and perform tasks.

Their keen senses of smell mean that they do very well in jobs where they need to use their noses, as with search and rescue jobs and sniffing out illegal substances such as drugs or explosives.

It is not uncommon to see them used to sniff out these things in schools and airports. German Shepherds are some of the most common types of pets in the United States.

This is due to the fact that they serve very well as guard dogs, are very protective and caring of their families, and they are very obedient and willing to learn commands.

To own a German Shepherd, it is important to let them get plenty of exercise, because they are very active and energetic dogs.

German Shepherds can live 10 to 12 years, and they are not generally prone to health issues, except for occasional hip and joint issues in their later years and sometimes ear infections, due to their very large ears.