Fossils have been found of dragonflies that lived eons ago and they had monster 2-foot wingspans. Today’s dragonflies have wingspans of 2 to 5 inches. Dragonflies belong to a classification of insects called Odonata, which means “having teeth”.

The dragonfly develops differently from other insects. Instead of having 4 stages of development of egg, larva, pupa, and adult, the dragonfly does not have a pupa stage. This called incomplete or gradual metamorphosis. 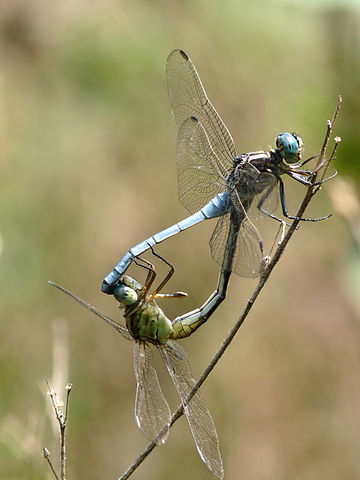 The eggs hatch and most of the dragonfly’s life is spent in water in the larva stage, which can last up to 2 years. In the larva stage, it molts 6 to 15 times. Then when it is ready to molt for the last time, it crawls out of the water to molts and the adult dragonfly emerges.

The abdomen emerges first and expands like a telescope. Then the head and the four wings emerge. It won’t be able to fly until the wings dry and become hard. This takes several hours to a couple of days.

A dragon fly has a mandible (jaws) with serrated teeth and can eat just about anything in or around water, such as tadpoles, flies, gnats, mosquitoes, other insect larvae, and larvae of other dragonflies. They catch their prey with their feet in mid-air or skimming the water and tear it apart to eat it without having to land. Dragonflies fly like little helicopters. Each of the 4 wings operates independently which allows the dragonfly to fly in any direction including sideways or backwards or they can hover. They are able to judge the speed and direction of their prey and make adjustments to their flight.

The head of the dragonfly is the largest portion of the body. The head is almost all eye and they have excellent sight. The head has an enormous compound eye with 30,000 facets which allows it to see in every direction, even behind. It never collides with other flying insects because its sight is so exceptional.

According to scientists, dragonflies can see colors that are beyond the human spectrum. That is, they apparently see colors that humans and other animals and insects cannot detect.

As most insects cannot cope with salty water, there are very few insects are found in ocean water. However, there are some species of dragonfly, such as the seaside dragonlet, that lays its eggs in salt water and its larvae remains in salt water to survive to adulthood. It is the only dragonfly in North America that lives its entire lifecycle in salt marshes, mangroves, and salt lakes.