The domesticated cow is the most common farm animal in the world. They belong to the family “bovidae” and are related to antelopes, goats, and sheep.

Cows are ungulates – hoofed animals with two toes on each foot. They are kept in most of the world for the milk and meat. Cows were first domesticated between 8,000 and 10,000 years ago. Today they are found wherever humans are.

The largest collection of cows is found in India, Brazil, and China.

As cows were domesticated, different breeds were created for different purposes.

All cows have horns. Some breeds have small horns, while others can have very long ones. Most cows have their horns removed at birth.

Cows are known for their udders. Udders are milk producing glands that have four teats.

Cows have large, wide mouths that allow them to graze on grass. They have 32 teeth, and the front of their mouth has a gummy pad that allows them to pull grass from the ground. 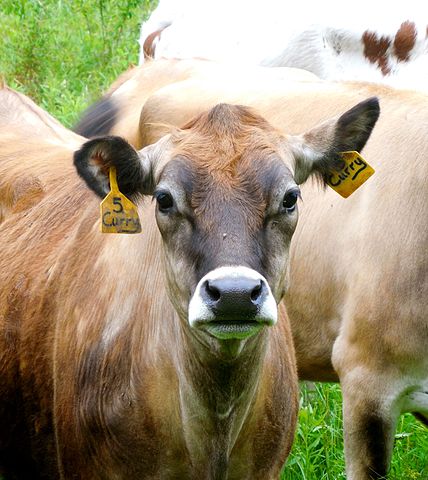 Cows are grazing animals that eat grass. They have a special four chambered stomach that allows them to eat a large amount of grass.

Humans have relied on cows for thousands of years. They are possibly the oldest form of wealth.

Cows have been valuable for their variety of purposes. Humans have kept cows for milk and other dairy products, leather, work uses, and meat.

In some countries such as India cows hold a religious place in society. They take part in religious ceremonies and are considered sacred.

There are an estimated 1.2 billion cows in the world, with 920 breeds.

The average cow is 2 years old when it can breed. A baby cow is called a calf. Calves drink their mother’s milk for the first 8 or 9 weeks of its life.

Cows usually give birth to one calf, though twins are possible. It is possible for cows to have ten or more calves over their life.

Cows can live to be over 20 years old.