Its proper name is puma concolor. It goes by several different ones: cougar, puma, mountain lion, and panther. They are all the same animal.

A cougar is a carnivorous mammal that is the largest of the small cat species. It goes by numerous different names because it can be found in many different places. Cougars can live pretty much anywhere that there is prey and shelter. They are highly adaptable animals that call several different ecosystems home.

Cougars are found in western North America, Florida, and South America. They live in prairies, forests, deserts, and swamps.

Cougars originally could be found in all areas of North America, but were eventually eliminated from the Midwestern and Eastern US.

They have a home range of 30 to 125 square miles. It can take a week for a cougar to circle its entire range.

Even though these ranges will overlap with other cougars, they rarely see each other. Instead, cougars leave messages for each other in the form of scratchings or markings.

The coat of a cougar is greyish tan to red with a lighter belly. They have pointed ears and a black spot on the end of their tail.

A cougar’s hind legs are much stronger than their forelegs. This allows them to jump 20 feet in the air.

They have strong paws and sharp teeth. Their bodies can be between 5 and 9 feet in length. 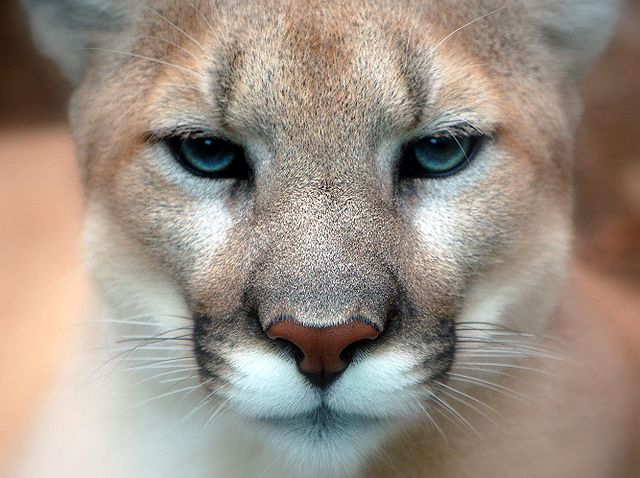 Cougars eat whatever they want. They sit atop the food chain and have no true natural predators.

The meat that cougars eat depends on where they live. Most cougars eat deer, pigs, and other like sized animals. Cougars have been known to bring down moose or elk.

Cougars often hide or bury their kill so that they can return to it later to feed.

Cougars are ambush hunters and use their eyesight to find prey. They can hunt during the day or night but are most active at dusk and dawn.

Cougars are mostly solitary. Mothers will travel with their young until they reach the age of two. Males and females only interact when breeding.

They are rarely seen by humans.

Cougars do not roar. They can growl, hiss, and purr. They are best known in pop culture for a high pitch scream, though they in fact rarely make this sound.

Cougars can live to around 10 years of age in the wild. In captivity they can live up to 20 years.

Cougars can breed at the age of three. They are pregnant for 3 months and have between 1 and 6 kittens. The newborn kittens have spots to help camouflage them.

Kittens are born with their eyes closed. They don’t open them until 8 or 9 days old. Their eyes are blue at birth and change to yellow in about 16 months.

Kittens lose their spots at about 6 months and can begin to hunt.