Clownfish are best known for their bright orange color and for their appearance in movies like Finding Nemo. They are also one of the most popular aquarium fish.

But is there more to clownfish than Pixar movies and aquarium life? Let’s find out!

Clownfish are also called clown anemonefish. They are bright orange with three big white stripes outlined in black. They reach about 4.3 inches in length.

They have a rounded tail and a dorsal fin that is lined with 11 spines. The tops of their fins have a thin black stripe. Where do clownfish live?

The name “anemonefish” comes from the multicolored sea anemone where clownfish make their homes.

Anemone are plant-like creatures that live on rocks and coral in the ocean. Clownfish can be found living in anemone in the Southwest Pacific Ocean, the Red Sea, and the Indian Ocean.

The anemone has poisonous tentacles, but clownfish have a special layer of mucus on their skin that protects them from this poison.

Clownfish like to live in anemone because it gives them protection from predators, and they eat scraps of the anemone’s food.

In return, the clownfish removes parasites and keeps the anemone clean. It also brings food to the anemone and sometimes drives off intruders. 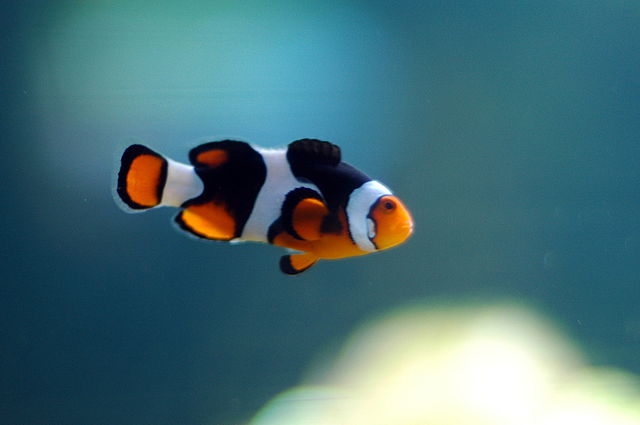 What do clownfish eat?

These leftovers usually include zooplankton, isopods, and copepods (types of crustaceans). Anemone also eat small fish and mussels, and clownfish will eat these leftovers too.

In aquariums, clownfish are often fed shrimp and krill.

Clownfish are active and aggressive. At the same time, they can be social and friendly. Clownfish communicate with popping and clicking noises.

Although they live in anemone, clownfish still form groups called schools. Each group consists of a breeding pair with a dominant female. The group also includes young clownfish and smaller male clownfish.

Here’s a surprising fact about clownfish: All of them are born male. They can become female, but they will only do so to be the dominant female of a group.

Once a clownfish becomes female, the change is permanent. 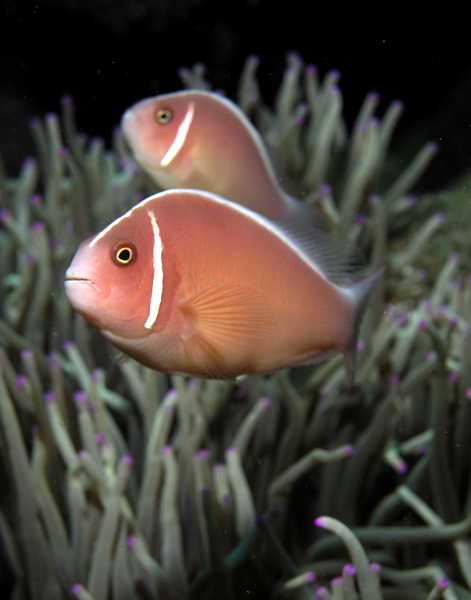 Although they are not currently considered endangered, clownfish are edging closer to Endangered Species Act Protection.

Clownfish have few natural predators. Their biggest threat is probably humans, who are interested in clownfish for their aquariums. However, many aquarium clownfish are born and raised in captivity.

Global warming is another threat to the clownfish. Increasing ocean acidity is destroying the anemone and the coral reef home of the clownfish.

Other Interesting Facts About Clownfish