The chicken is the most widely domesticated fowl in the world. Many cultures keep chickens for their eggs and meat.

Today’s common chicken is descended from the wild red jungle fowl of India, though some believe that it is more closely related to the grey jungle fowl.

Both these birds are about half of the size of a domesticated chicken.

Domestication of the chicken occurred over 10,000 years ago in Southeast Asia. Domestication spread from Asia to Europe and Africa. Historically chickens could be found in open woodlands and grasslands. As they were domesticated they became a staple of many farms.

Chickens began being kept in specific poultry farms in the 20th century.

Chickens are usually between 12 to 18 inches tall. They weigh between 2 and 6 pounds. Chickens are omnivores. They mostly eat seeds, berries, and insects. Chickens will also eat lizards and mice on occasion.

Chickens are social animals and like to be around other chickens. A group of chickens is called a flock.

There is often one dominant male in a flock. This male will push away all other males when they start to get big enough to challenge his dominance.

The pecking order for females is usually determined within 10 weeks. Males will attack each other into adulthood to determine the pecking order. Fights between males will often result in injury or even death.

The lifespan for a chicken is dependent on where it is being kept and for what reason. In the wild chickens can live up to 4 or 5 years.

Chickens that are being kept for their meat usually only live for about 3 months. Egg laying chickens tend to only live one year

There are 25 billion chickens worldwide.

Chickens usually breed in the spring and summer. Once fertilized, eggs will hatch in about 21 days.

Baby chicks are born covered in soft down. They will fully grow their feathers within 4 to 5 weeks. 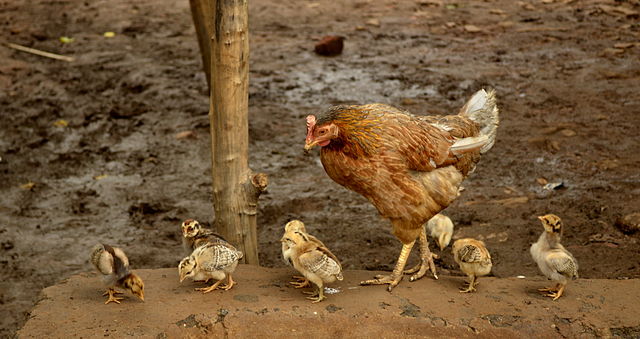