Camels are large mammals known for their ability to travel great distances with little amount of water. This has given them the nickname the “ships of the desert”.

There are three species of camels: Dromedary (also called the Arabian camel), domesticated Bactrian, and the wild Bactrian.

The Dromedary camel has one hump, while both the domesticated and wild Bactrian have two. Camels can be found in Africa and Asia. Bactrian camels are native to the Gobi Desert in China as well as the Bactrian steppes of Mongolia.

Dromedary camels can be found as pack animals in the north of Africa and the Middle East.

Over 13 million Dromedaries reside in India and the Horn of Africa.

The camel was domesticated over 3,000 years ago. There are no longer wild Dromedary camels in the world.

Camels have adapted perfectly to survive harsh desert climates. They can endure temperatures between -20 to 120 Fahrenheit. They also have a membrane that covers their eyes and protects them from sandstorms.

Camels are known for their long legs, short tails, and of course their hump(s).

The hump is actually fat, and not water. The camel uses this fat as a source of energy. The hump weighs about 80 pounds.

Camels will eat almost any form of vegetation it can find in the desert. They spend between 8 to 12 hours a day looking for food.

In order to absorb and store water camels need to eat plants that have a lot of salt.

Each half of the camel’s lips move independently. This allows them to better eat short grasses found in the desert.

Camels can regurgitate their food to chew it again. This predictably gives them stinky breath.

Camels are pack animals that live in groups of up to 20 individuals. The group contains a dominant male, females, juveniles and calves.

Males that have been forced from a group often join other males in “bachelor” herds. 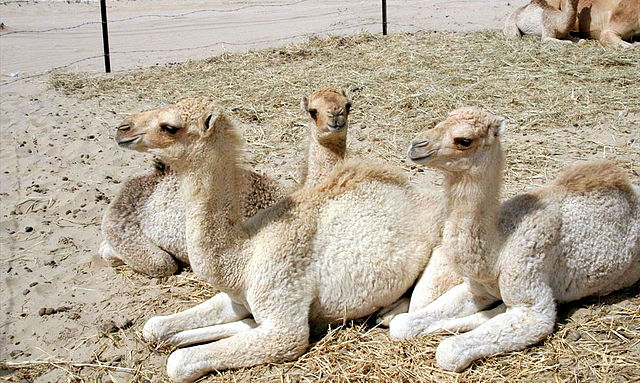 Camels typically walk in a single-file line. Females will take turns leading the group and the male will bring up the rear.

Camels communicate predominantly through body language. Camels will use body position to form groups, as well as snap, kick, or spit when scared.

When being bothered or frightened camels will “spit”. This spit is actually made up of the content of their stomach mixed with saliva.

Camels are not typically aggressive animals.

Camels also communicate through sounds. They groan, moan, and bellow at each other. Mothers and their newborns will hum together.

Life Cycle of a Camel

They breed in the winter or rainy season and are pregnant for 15 months. Before giving birth, the mother will separate herself from the herd. She will give birth to one calf per pregnancy.

When born babies do not have a hump. They can walk in as little as half an hour after birth. A calf will reach adult size at about 7 years of age. 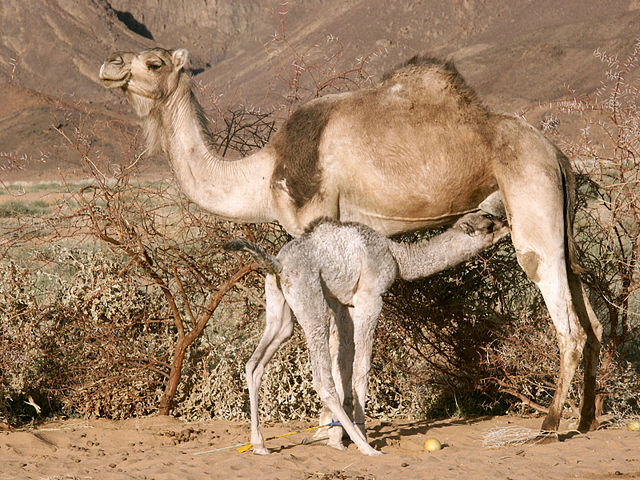