Bonobos are primates that can only be found in Africa’s Congo Forest. When they were first discovered scientists thought they were related to chimpanzees, which explains why some call them pygmy chimpanzees.

Don’t call them monkeys. Bonobos are apes – tailless primates that also have an appendix.

Bonobos and chimpanzees are the closest relatives to human beings. Both share 98.7% of their DNA with us! This similarity leads some to believe that bonobos are the most intelligent animal in the world (aside from humans). 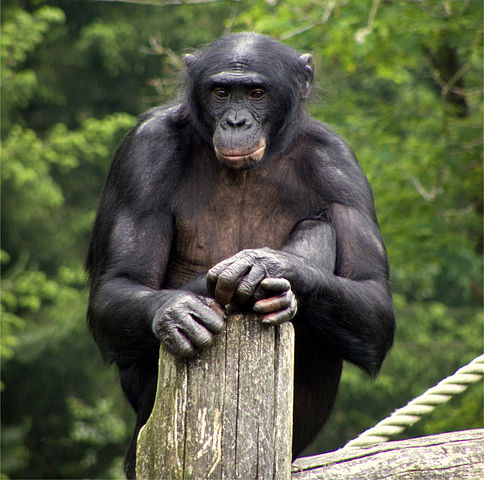 There is one place in the world where you can find wild bonobos – the Democratic Republic of Congo. Bonobos enjoy the lush rainforest located south of the Congo River in central Africa.

Bonobos look very similar to their chimpanzee cousins, though they are slightly smaller. They also have longer, more slender limbs.

The bonobos’ skeletal anatomy allows them to walk upright more easily than chimpanzees. The hair on their head also is naturally parted down the middle. 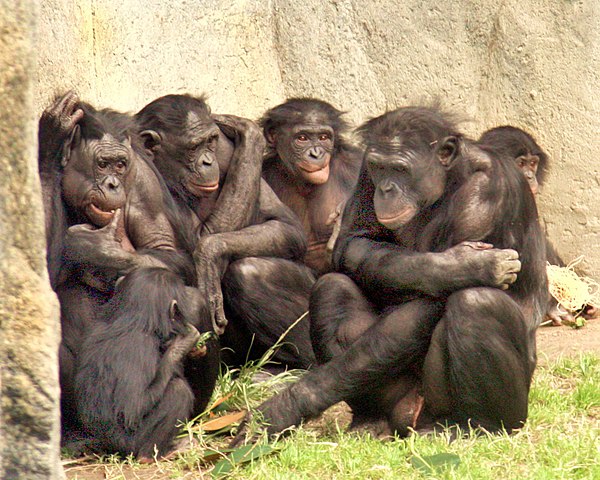 Bonobos are omnivores, though much of their diet is plant based. They eat mostly fruits, leaves, and other vegetation from trees.

Bonobos will also eat invertebrates such as earthworms and insects. They have been observed to rarely eat smaller mammals.

Bonobos have a complex social structure. They live in matriarchal groups of up to 100 bonobos. That means that their groups are dominated by the females.

Males tend to follow the lead of the more mature females in the group. Male bonobos rarely work together, while the females will join with other females and their sons to get their way.

Unlike chimpanzees, bonobos do not turn to violence against each other very often. Instead they tend to solve disputes with sexual behaviors.

Bonobos perform many of their daily activities in groups. They will often forage for food in groups between 6-15 members.

Bonobos are very social animals and touch each other to provide comfort.

Humans aren’t the only ones that play games. Young bonobos will play games such as King of the Mountain and Blindman’s Bluff. When a bonobo is born it is nearly helpless to take care of itself. Mother bonobos carry their young for the first two years of its life.

Male bonobos stay with their mother’s group for their entire lives. Female bonobos are forced from the group when they are old enough to reproduce.

She finds a new group and becomes a permanent member once she has given birth.

Bonobos don’t have their first baby until they are the age of 13. They usually reproduce every 5-6 years.