The bobcat is the most common wildcat in North America. It is related to the Canada lynx, though smaller.

Bobcats get their name from their short tail which appears to be cut or “bobbed”.

Where Do Bobcats Live?

They can live in a variety of different ecosystems. Bobcats can be found in forests, deserts, swamps, and even suburban areas. Bobcats are roughly twice the size of a normal house cat. Their height is usually about 1.5 to 2 feet to the shoulder, and they weigh between 9 and 33 pounds.

Bobcats are confused with their cousins the lynx because they both have ear tufts. The tufts are thought to help the bobcat have improved hearing, so it can hear its prey.

Bobcats usually have a brownish coat, with possibly a reddish tinge. They may also have black or brown spots or stripes. Their coat helps them to blend into their environment, be it the forest or rocks.

There are two white dots on the back of the bobcat’s coat. It is believed that this is to help the young follow their mother in dim light. What Do Bobcats Eat?

Bobcats are carnivores. They attempt to be as quiet as they can to surprise their prey.

They eat mostly rabbits and hares but will also eat rodents and birds. If they are near a farm, bobcats will eat the livestock held there.

To catch their prey, bobcats have become excellent climbers. They will stalk their prey for between 2 to 7 miles a night.

How Do Bobcats Behave?

Bobcats are nocturnal animals. During the day they will spend time in one of their dens. They usually have a main den and several lesser visited dens. Their main den is usually a cave or rock shelter.

A male’s territory is usually between 25-30 square miles. A female’s is much smaller, usually only about 5 square miles.

Bobcats mark their territory through scent and scratching marks on trees. A bobcat will usually respect the markings of another bobcat’s territory. This makes confrontations between bobcats rare. 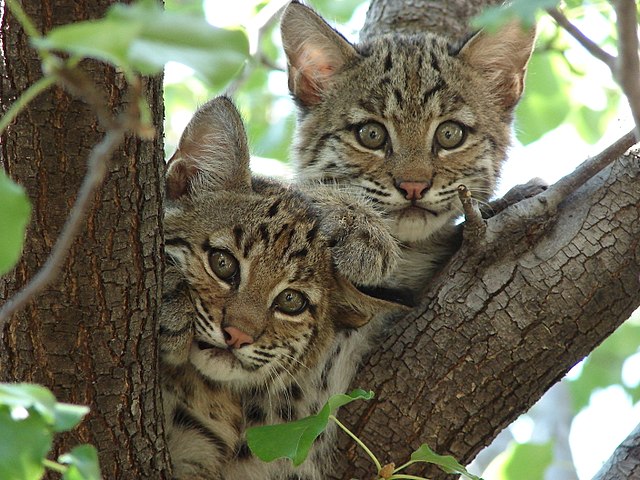 How Long do Bobcats Live?

There are between 750,000 to 1 million bobcats in the wild. In the wild bobcats live between 5 and 15 years. They can live up to 30 years in captivity.

A male bobcat will attempt to mate with multiple females a season. Mating usually happens in late winter.

Females will give birth to between 1 and 6 kittens in a secluded den. Birth usually occurs in early spring.

The mother will nurse the kittens for 2 months. They will start hunting on their own at 5 months old. They will leave their mother and find their own territory between 8 and 11 months old.