Though the name anaconda can be used to describe several different snakes, it is usually used for the green anaconda.

Anacondas are water loving snakes found in South America. They are mostly found in the Amazon east of the Andes mountains. They can also be found on the island of Trinidad.

They can be found on land, but they prefer swamps and marshes. The anaconda uses the dark swamp water to help hide itself from its prey.

An anaconda’s eyes and nose are on the top of their head. This allows them to almost fully submerge their bodies in water and wait for their prey to come to them.

Anacondas are known for their enormous size. The green anaconda is considered the heaviest snake in the world. It can weigh up to 550 pounds and reach 30 feet in length.

The green anaconda is usually an olive-green color with egg-shaped black spots on its back. It can reach a diameter of 12 inches.

The green anaconda is a carnivore and eats mostly mammals and birds. Typically, anacondas will dine on wild pigs, deer, capybaras, and even jaguars.

Smaller prey are killed using the anaconda’s sharp backward facing teeth. For larger prey, the anaconda will wrap itself around the prey and squeeze.

Anacondas have jaws connected with stretchy ligaments. This lets them open their jaws up to three times as wide as their head to eat their prey whole.

If caught on land, anacondas will often bring their prey into the water. This may help them with positioning their prey for eating, or to protect them from other predators.

They can go weeks or even months between feeding.

Anacondas are not venomous, nor are they even very aggressive in the wild. Scientists have been known to walk up to them and carry them away without incident.

Anacondas live about ten years in the wild. 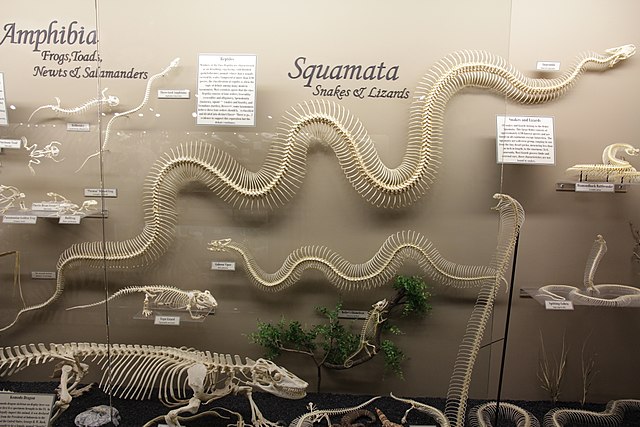 Unlike other snakes, anacondas do not lay eggs. The female anaconda is pregnant for nine months. The babies are enclosed in a clear membrane that they will break through once born.

They give birth to 24 to 50 live young at once. The baby snakes are about 2 feet long and instinctively know how to swim and hunt.