Alpacas are members of the camelid family. They are related to the camels that many people think of, but do not have humps.

Alpacas are domesticated animals from South America. There are two breeds of alpacas: Huacayas and Suris. Huacayas make up about 90% of all alpacas.

Alpacas are also related to llamas, guanacos, and vicunas. Llamas and alpacas are completely domesticated, while guanacos and vicunas are not. Alpacas are domesticated animals that are found in South America. People in the Andes Mountains first domesticated alpacas over 6,000 years ago.

Alpacas are very adaptable animals that can make their home in a variety of environments. As they are domesticated and kept mainly for their wool and meat, they are most often found on farms.

Their cousins, the wild guanacos and vicunas, can be found all over South America, from arid deserts in northern Chile to wet Tierra del Fuego at the base of the continent.

Alpacas have long, slender legs and necks. They have small heads and long, pointed ears. They are known for their fleece. Huacaya alpacas have fluffy, crimpy fleece, while Suris have a dreadlock-like fleece.

Alpacas are the smallest of the domesticated camelid species. They usually weigh between 100 to 200 pounds and reach a height of 3 feet to the shoulder. Most are between 4 and 7 feet long.

Alpacas can come in many different colors. There are 22 different fleece combinations.

Alpaca fleece is famous throughout the world as it is known for being very fine and soft. When sheared, an alpaca can produce between 5 and 10 pounds of fleece per year.

The fleece is often used to make yarn, clothing, and blankets.

What Do Alpacas Eat?

Alpacas are herbivores and grazers. Their diet consists mostly of grass and hay. They also don’t eat very much – only about 2 pounds of food a day.

There are two different types of teeth in an alpaca mouth. The front of the mouth only has lower teeth. The top of the mouth has a dental pad that is used to grind up grass. The back of the mouth has molars that are used for chewing cud (partially digested food).

Alpacas are social animals. They feel most comfortable in herds. These herds can also contain different types of animals, such as goats and sheep. 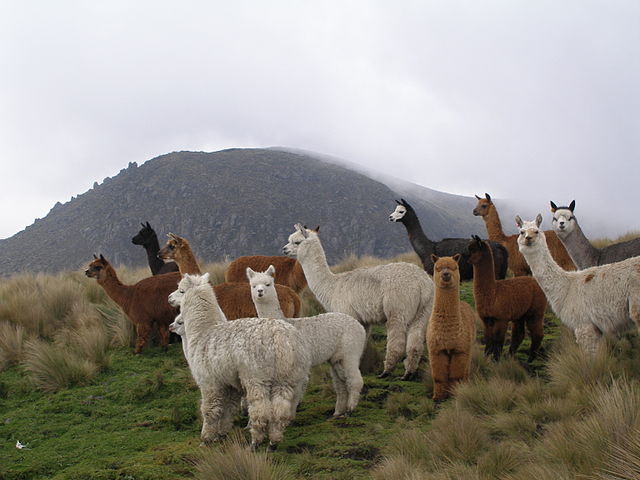 They are mostly docile creatures. They are not aggressive, and their only form of defense is to run away. Like other camelids, they may spit when aggravated or threatened.

They have excellent eyesight as they are often on the lookout for threats. Alpacas will also communicate with each other through hums and shrieks.

Life Cycle of an Alpaca

Alpacas can live up to 20 years.

They are capable of breeding once a year and give birth to one baby per pregnancy. The pregnancy lasts between 242 and 345 days. Babies weigh between 16 and 22 pounds at birth.

There is not a breeding season for alpacas.